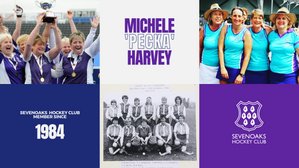 A member of Sevenoaks Hockey Club since 1974, Michele Harvey (or Pecka) is as purple as they come...

Michele Harvey, or Pecka as she most commonly known is a social media guru. Now she has hung up her SD card and passed on to a new Comms Team. Pecka, who created social media for SHC with twitter, Instagram, FB and of course the lovely Oaksy. It was Pecka's idea which came into fruition in 2015. Oaksy is part of the Sevenoaks brand, a lovable squirrel with a big heart.

Pecka is often seen behind the lens of a camera, capturing that great action shot and goal celebrations. Making memories for the club and its family. She is a player, coach, volunteer. She gives her support 100% where she can and is a dynamo goal scorer on the pitch!. Pecka met her husband, Richard 'Billy Whizz' Harvey at the clubs famous Vets Festival in 2009. Love blossomed and marriage. Billy and Pecka are permanent fixtures at most social events as well as matches.

Pecka has had her fair share of health challenges. A keen advocate for breast Cancer Care with pink week and firmly believes that playing hockey is good for your mental health, supporting campaigns in that respect. Pecka is a true member of the purple family that is Sevenoaks Hockey club. We are very proud to have her.

We caught up with Pecka this past week and here is our very special conversation we had.

When did you first start playing?
I first started playing at school, Ravensbourne school for girls at the age of 11. Our school reached the National finals at U16 level where we came third, not bad for a comprehensive school.

How many teams were there when you first started?
When I joined Sevenoaks there were just three teams.

Honours board
I represented Kent at U14 and U16 and East at U16 level.

Who are your hockey heroes?
My hockey heroes are Alex Danson for her goal scoring ability and also she is a fighter, like me. My other hero is Pat Morecroft who played for Sevenoaks for many years and was my PE teacher and persuaded me to join Sevenoaks which was the best thing I've ever done.