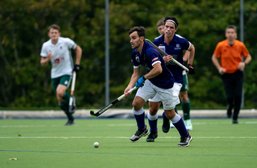 We sadly say goodbye to Jason Bigara as he joins New Hall school in Chelmsford as head of hockey, starting the role in the new year.

It is with regret that we say goodbye to Jason Bigara from Sevenoaks Hockey Club as he joins New Hall school in Chelmsford as head of hockey, starting the role in the new year.

We would like to thank Jason for all the work and commitment he has given to the club since joining in September 2019. Jason has had a positive impact within the junior section and a key feature to the junior camps, he's coached the men's 2's and ran circles around the opposition in the men's 1s matches. We would like to thank him for his contribution to the Joker draw, Hockey & Coffee mornings, as well as keeping us connected through his Commit to be Fit lockdown sessions. Both Jason and Vaila threw themselves into Purple life and will leave with a hint of purple engrained I’m sure.

Jason's duties in the junior section will sadly finish at the end of December but he will still play for the Men's 1s and coach the Men's 2s until the end of the season.

To Jason - thank you and good luck, we will miss you at Sevenoaks HC!