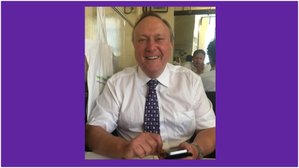 We are deeply saddened to tell you that Roy Taylor, husband of our President Karen Taylor, died suddenly on Monday 8th February.

We are deeply saddened to tell you that Roy Taylor, husband of our President Karen Taylor, died suddenly on Monday 8th February. It is hard to express the sadness and shock that this loss brings.

Karen and Roy joined the Club in the early 1980’s and have been leading members of the Sevenoaks hockey family ever since. Roy immediately became a member of the successful Men’s 1st XI and was an important part of the team which won a league and cup double in 1985. His playing career continued for another 30 years. Roy represented leading teams across the Club, while he and Karen also appeared in every Veteran’s Festival from the founding of the event in 1984. In particular, Roy played with distinction in the Old Oaks, for whom he scored the winning goals in their victory in the National Plate Final in 2007.

Off the field, Roy was equally generous with his support for the Club, serving as Junior Section Chair (coaching a number of different junior teams for over 20 years), Bar Chairman and also captaining several men’s teams. In recent years, his focus turned to coaching, umpiring and supporting. He took special pride in supporting family members and those he had coached in top level hockey. He was an ardent supporter of many teams especially of the men’s and ladies 1s and 2s and was always a passionate and committed presence at pitch side.

He was a fine all-round sportsman, memorably playing cricket for Knockers and, in later years, Roy also took on the organisation of the excellent Club Golf Days, which he performed with characteristic flair and style.

Above all, Roy was a warm and charismatic personality who was a true friend to us all. He brought a sense of enjoyment and enthusiasm to everything he did and he will be very deeply missed.

His sudden loss is a deep shock and our thoughts and deepest condolences are with Karen, Laura, Ali, Robbie and the rest of the family at this saddest time.