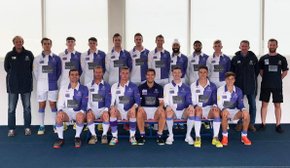 Sevenoaks faced off against newly promoted Old Cranleighans on Saturday evening at Hollybush Lane. After a somewhat slow start to the season, the visitors had managed to defeat unbeaten league leaders Reading the previous weekend 2-1, a result that would have given them plenty of confidence coming into the game.

Unfortunately for Sevenoaks, the first half was one to forget as the home side never really managed to get going. Although Oaks had some good possession, and a few half chances, they failed to create anything clear cut and could not put the ball in the back of the net. Old Cranleighans on the other hand converted their chances in the first half scoring two penalty corners to go into half time with a two goal lead.

Sevenoaks needed a big performance in the second half to come back from the two goal deficit. Sevenoaks started well, showing true determination and playing some great hockey to shift the momentum of play into their favour. After an excellent team move to secure a penalty corner, Oaks scored their first goal of the game through a drag flick from Craig Wiid who emphatically slammed the ball low into the bottom right corner. Sevenoaks continued to turn the screw, piling on the pressure on the Old Cranleighans defence and minutes later scored the equaliser through Ben Allbery after some fantastic play from man of the match Ian Haley.

This time Oaks did not take their foot off the gas and continued to impose themselves on the game. A few minutes into the final quarter, Ian Haley picked the ball off the Old Cranleighan defender and found James Thomas who carried the ball into circle and set up Ali Taylor on the far post. Taylor made no mistake and coolly slotted the ball into the goal to put Sevenoaks into the lead for the first time in the game.

Sevenoaks had a good chance to seal the three points with about three minutes to play. Sevenoaks forward Sam George set up Jason Bigara with a great chance to secure the win but after beating the goalkeeper Bigara unfortunately put the ball wide to everyone’s despair. Old Cranleighans with less than two minutes to play won a very controversial penalty corner. The Sevenoaks defensive penalty corner unit did enough to stop Old Cranleighans from scoring and the final whistle went securing a huge three points for Sevenoaks and an incredible comeback to win 3-2.

Sevenoaks currently sit third in the league, two points behind leaders Teddington and with everything to play for. The league will resume following the lifting of the new national lock down restrictions which come into force this week.


MATCH TEAS AFTERWARDS AT VINE. Regret Tier 2 residents will need to eat and drink outside- really sorry. If anyone does NOT want a hot meal please tell me. If you’re not selected but want to join squad at Vine please also tell me. Thanks Pete