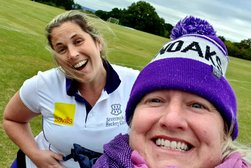 Sadly no winner for birthday Captain

So finally the hockey league was upon us after weeks of uncertainty due to Covid 19.
Thank you to Kent hockey for making this happen and all those behind the scenes.
With several new faces joining the team along with a new Captain Lou Curry, it is set up for an exciting season (in the hope that we at least reach xmas)
Edenbridge started brightly and using their big hitters from the back looked to unsettle Sevenoaks.
The first half saw chances from both sides but both keepers played their part and kept the ball out.
The defence of Rhino and Nic Butler also battled hard at the back with some terrific defensive work. Capt Curry worked her socks off all over the pitch supported by Shrimpy, Joelle, Pecka and the youngsters Izzy, Immy, Ella and Fleur helped to keep up the momentum. Pia and Pricey made some great moves into the D but it remained nil nil at halftime. We also had the appearance of Roxy, no not the 7s captain but the Locks dog which possibly stopped a potential goal, well we like to dream.
Some wise words from Sedge helped Oaks to attack more and some lovely work by Fleur created several short corners. Michelle lock who came up from the 6s was feisty and competitive and towards the end helped to turnover the ball which had us on a 3 against 1, sadly it was not to be and the ball just went past the left post

The score remained nil all which probably was a fair result. Big thanks to Panda for being our goalkeeper and so onwards and upwards with another late game against Gravesend next week.

Player of the match